Skip to content
Did you know that hearing loss is linked to memory loss and dementia?

Hearing loss is widespread, and it affects people of all ages. There are many reasons for hearing loss including hereditary factors, noise exposure, trauma and ear disease.  Hearing loss becomes more common as we age. Research shows increased severity of hearing loss correlates to increased memory loss and dementia.

This graph shows the results from a study by the National Foundation of the Deaf called Social and economic costs of hearing loss in New Zealand (published in December 2016).

Hearing loss is usually gradual. In the beginning, the hearing loss takes away the beginning of the sentence, the little details and the punchline. With time hearing loss may increase mental fatigue – as you concentrate harder to follow along. It can begin to erode your confidence – as you are no longer sure about what was said and it can lead you to feel embarrassed about missing the details or about having to ask for repeats too often.

The gradual nature of hearing loss means that we adapt over time. We change our behaviour, we choose our environments, and slowly our relationships change as everyone adjusts to a change in our hearing. Often hearing loss leads people to socialise less, which can lead to less overall activity.  Hearing loss is also linked to memory loss and dementia (or cognitive decline).

Hearing loss is invisible and sneaky.

As hearing changes, we adjust.

Gradually it affects personality and relationships.

Hearing loss changes us over time.

Hearing loss is linked to memory loss and dementia

The study found that people with more severe hearing loss had a higher likelihood of developing a cognitive disorder, and an increased decline in mental function. Even subjects with mild hearing loss were found more likely to experience cognitive difficulties like memory loss and dementia; it is also linked to increased falls.

The exact link between hearing loss and cognitive decline is not yet fully understood, and current studies are focusing on this question. It is possible that is due to increased “cognitive load”, where the brain is overwhelmed with demands on its limited resources. Concentrating hard to follow a conversation means we have fewer resources for other things like memory and maintaining balance.

“Communicating when you have a hearing loss, takes up a lot of brain power. It’s a bit like a computer that runs slower when there is a large program running in the background,” says Maree O’Sullivan, Audiologist from Auckland Hearing.

There is evidence that the part of the brain that was used by the hearing system gets reallocated and is used by the visual system in people with hearing loss.  “Declines in hearing abilities may also accelerate grey matter atrophy and increase the listening effort necessary to comprehend speech.  Hearing aids may not only improve hearing but preserve the brain,” said Dr Lin. 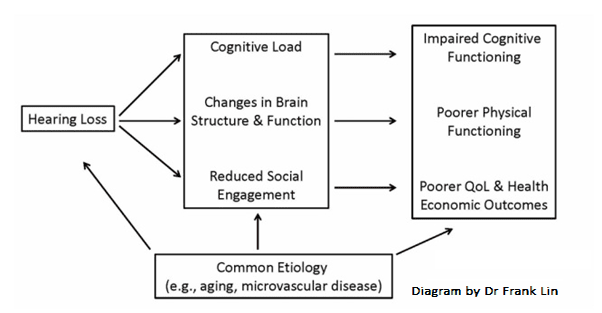 How hearing loss may effect hearing

As evidence continues to mount that hearing loss is a contributing factor in the development of memory loss and dementia, it is imperative to consider the profound consequences of ignoring hearing loss. People with hearing loss on average wait ten years before they seek treatment for hearing loss; even though the sooner hearing loss is detected and treatment begins, the more hearing ability (auditory brain function) can be maintained.

“Considering early diagnosis and medical intervention of hearing loss slows the progression of dementia and Alzheimer’s disease, it is more important than ever for patients to get their hearing loss treated sooner rather than later,” said Maree O’Sullivan – Audiologist at Auckland Hearing.

Research has shown that people that wear hearing aids do not show the same cognitive decline as those who don’t.  However, although there is a definite co-relation, Dr Frank Lin and his team are not prepared to assume causation, meaning that we can not assume that wearing hearing aids reduces cognitive decline. Reduced cognitive decline that is measured may be due to other factors, for example, education levels or socioeconomic factors that may lead some people to get hearing aids and others to choose not to.  A very large study is currently underway by Frank Lin and his team to clarify whether wearing hearing aids protect from memory loss and dementia when taking into account other factors.

At Auckland Hearing, we see positive change in our clients after they get hearing aids, anecdotal evidence that hearing aids keep you active. We often measure improvement in our client’s ability to understand speech (using speech perception testing), once people with hearing loss start wearing their hearing aids all day every day. Human brains have plasticity which means they are continually adapting. Once people retrain their brain by exposing it to sound every day, they hear better and can be more involved in the world around them.

A bit about Auckland Hearing

Call Sarah to book your appointment with Yvonne or Maree now.

Auckland Hearing is an independent hearing aid and audiology clinic set up by Maree O’Sullivan.  Maree has worked in Audiology for nearly 25 years and started Auckland Hearing so she could focus on the needs of each client (rather than corporate profits).

We provide a full range of hearing services and work with all of the Ministry of Health approved hearing aid brands in New Zealand. This means we can fit the hearing aids that best suit your needs.